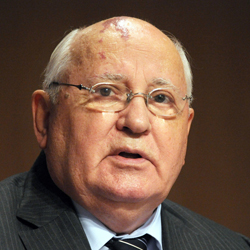 Mikhail Gorbachev has been one of the 20th century’s most pivotal leaders. As President of the Soviet Union, he ended the 50 years of nuclear brinkmanship known as the Cold War. In its place, he taught his country and the world two new ideas: glasnost and perestroika. These revolutionary concepts led to the blossoming of freedom in Eastern Europe and the introduction of democracy to Russia.

President Gorbachev dedicated himself to building a relationship of mutual trust between the Soviet Union and the United States, signing two broad disarmament pacts that dramatically reduced the danger of worldwide nuclear destruction. For his extraordinary efforts, he was awarded the 1990 Nobel Peace Prize.

Now retired from politics, President Gorbachev continues to strive towards achieving his global vision of peace. In 1992, he founded the Gorbachev Foundation, a nonprofit, non-partisan educational foundation dedicated to addressing the challenges of and articulating new priorities for the post-Cold War world.

In 1993, he founded Green Cross International, an environmental organization with the mission to help ensure a just, sustainable and secure future for all by fostering a value shift and cultivating a new sense of global interdependence and shared responsibility in humanity's relationship with nature.

For the first time since World War II, a generation of children is growing up without the fear that their generation may be the last. Mikhail Gorbachev will be forever honored for providing the courage and vision to help make that possible.