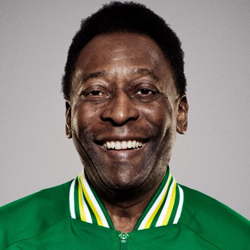 Soccer in its purest form” was played by Pele, a South American superstar who was the world’s most famous and highest-paid athlete when he joined a North American team in 1975. He led the Brazilian national soccer team to three World Cup victories in 1958, 1962, and 1970 and to permanent possession of the Jules Rimet Trophy.

Edson Arantes do Nascimento, better known as Pelé, was born to a poor family on Oct. 23, 1940, in Tres Coracoes, Brazil. Pelé grew up in poverty in Bauru, São Paulo earning extra money by working in tea shops as a servant. He was taught football by his father, and though he could not afford a proper football, he played with a newspaper stuffed sock, tied with string or a grapefruit.

He began playing for a local minor-league club when he was a teenager. He made his debut with the Santos Football Club in 1956. With Pele at inside left forward, the team won several South American clubs’ cups and the 1962 world club championship, in addition to the three World Cup championships.

Pele scored his 1,000th goal in 1969. The legendary athlete retired in 1974 but made a comeback in 1975 after accepting a reported 7-million-dollar contract for three years with the New York Cosmos of the North American Soccer League. He said he came out of retirement, not for the money, but to “make soccer truly popular in the United States”. His farewell appearance was against his old Santos club in 1977.

Pele, whose nickname does not mean anything, became a Brazilian national hero and was also known as Perola Negra (Black Pearl). An average-sized man, he was blessed with speed, great balance, tremendous vision, the ability to control the ball superbly, and the ability to shoot powerfully and accurately with either foot and with his head. In his career he played in 1,363 matches and scored 1,282 goals. His best season was 1958, when he scored 139 times. In addition to his accomplishments in sports, he published several best-selling autobiographies, starred in several documentary and semidocumentary films, and composed numerous musical pieces, including the entire sound track for the film ‘Pele’ (1977).

-1978 recipient of the International Peace Award,

-1997, Pelé received an honorary Knight Commander of the Order of the British Empire from Queen Elizabeth II, at a ceremony in Buckingham Palace

-2012, Pelé was awarded an honorary degree from the University of Edinburgh for "significant contribution to humanitarian and environmental causes, as well as his sporting achievements", his first such degree from a European university.

Pelé appeared at the closing ceremony of the 2012 Summer Olympics in London, following the handover section to the next host city for the 2016 Summer Olympics, Rio de Janeiro.