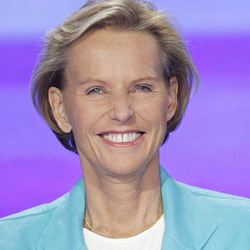 Christine Ockrent is a famous journalist and producer, and for many years was the anchor of the weekly current affairs programme France Europe Express, on France 3 Television. She is the president of the advisory board of METRO International France, and a columnist for various French and Swiss newspapers.

Ockrent is the former chief operating officer of France 24 and RFI, and former editor in chief of the weekly news magazine L'Express. The first woman to anchor and edit the prime time news, she has had an outstanding career in television, both as producer of documentaries and anchor of the evening news, and has been awarded several French and international distinctions for her work in TV journalism. She has been awarded the French Legion d’Honneur, the l'Ordre national du Merite and Officer de l'ordre de Leopold (Belgium).

She began her career in broadcast journalism at NBC News and worked for eight years at CBS' 60 Minutes. As editor in chief of L’Express, Ockrent was the only journalist granted an interview with Saddam Hussein in the middle of the Gulf War.

She was also deputy director general of TF1 Television and an editor with RTL Radio. She is on the board of International Crisis Group (ICG), the French Council on Foreign Relations (IFRI), the European Council on Foreign Relations (ECFR), the Center for European Reform (CER), Human Rights Watch France, Reporters Sans Frontières and the Women’s Forum for the Economy and Society.