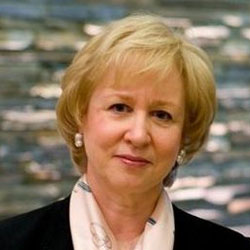 The Rt. Hon. Kim Campbell rose to fame as Canada’s first female Prime Minister and one of the youngest Prime Ministers worldwide. Since her time as leader, she has traveled internationally to represent Canada and strengthen democracy and women’s leadership around the world.

Ms. Campbell is Chair of the International Advisory Board of the Foundation for Effective Governance in Kiev and chairs the steering committee the World Movement for Democracy. She is a Trustee of the International Center for the Study of Radicalisation and Political Violence (ICSR) at King’s College London. She also serves on advisory boards of numerous other international organizations such as the Arab Democracy Foundation in Doha, the Middle Powers Initiative (MPI) and the newly launched Concord Project at UCLA. Ms. Campbell is a member of the Pacific Council on International Policy, (the West Coast affiliate of the Council on Foreign Relations), the Global Council of the Asia Society of New York and Board of the Forum of Federations, and a Senior Advisor to the Crisis Group. Ms. Campbell ´s corporate director experience includes the high tech, bio-tech and medical devices industries, and she is a consultant on issues related to democratization and leadership. She is also a founding member of the board of the Women’s Leadership Fund, an investment fund based in Geneva.

Her varied influential roles have included working as Consul-General in Los Angeles and as lecturer at Harvard University. Campbell’s initiative also led to her become a founding member of the Club of Madrid, an independent organization of former heads of state and government whose main purpose is to strengthen democracy in the world.

For women, Kim Campbell has held the chair of the Council of Women World Leaders, a network of women who hold or have held the office of president or prime minister. She also served as president of the International Women’s Forum, a global organization of women of significant and diverse achievement. She has been confirmed as the first visionary for A Bold Vision, a national visioning conference for Canadian women in 2014.

From her rise as a young leader to an international advocate for democracy, and a ‘leader of leaders’, Kim Campbell brings a unique and matured perspective on current events, politics and international relations. 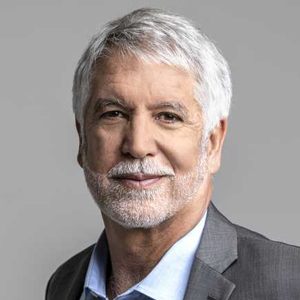 Enrique Penalosa
Twice-elected Mayor of Bogota; Leading Sustainability and Mobility in Cities Advocate; President of the Board of the Institute for Transportation and Development Policy of New York