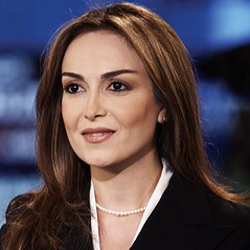 Nadine anchored Al Arabiya's special coverage of the major GCC markets' correction that wiped up to 50 percent of the market capitalization of GCC stocks at the beginning of 2006. Her experience however goes beyond the newsroom to the field, where she has reported live from the NYSE, and has done investigative reports from major Arab cities especially Riyadh, KSA.

She has also covered and reported from major international events and conferences, including the IMF and World Bank 2006 meetings held in Singapore, the World Economic Forum Annual Meeting 2008 and 2009 in Davos, and the Euromoney 2006 conference "Building the Future" in Riyadh. Nadine is often asked to moderate high profile conferences such as the panels at the World Economic Forum, and the "Leaders in Dubai".

Nadine joined Al Arabiya in 2005 from CNBC Arabiya in Dubai, where she worked as a business news anchor, as well as hosting a personal finance show.

Previously she worked as a Private banking consultant for 2 international banks in Lebanon, ABN AMRO Bank and BNP Paribas, advising high net worth individuals on investment alternatives. She started her career in media presenting a daily summary of business news at MTV (Murr TV) in Lebanon, while working as a private banker, pioneering stock markets' coverage in the Arab world.