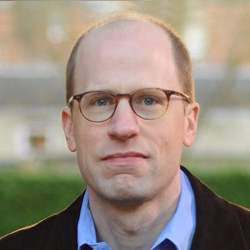 One of the most important thinkers of our time, Nick Bostrom changes the way we view the big picture—how advances in artificial intelligence and other technologies will reshape the human world, and how present actions affect the future.

Nick Bostrom is Professor at Oxford University, where he is the founding director of the Future of Humanity Institute. This is a unique research center where leading minds from computer science, mathematics, philosophy, economics, and engineering spend their days thinking about future technology impacts, global priorities, catastrophic risks, and transformative opportunities.

He is also director of the Strategic Artificial Intelligence Research Center, which does research on how the coming machine intelligence revolution will change society and the economy.  His book on this topic, Superintelligence: Paths, Dangers, Strategies (Oxford University Press, 2014), became a New York Times bestseller and altered the global conversation on the future of AI.

Bostrom has a background in theoretical physics, computational neuroscience, and the foundations of probability theory as well as philosophy.

Bostrom was the recipient of a Eugene R. Gannon Award (one person selected annually worldwide from the fields of philosophy, mathematics, the arts and other humanities, and the natural sciences).  He has been twice listed on Foreign Policy’s Top 100 Global Thinkers, and was included in the Prospect magazine’s World Thinkers list, the youngest person in the top 15 from all fields and the highest-ranked analytic philosopher.  His writings have been translated into 24 languages, and there have been more than 100 translations and reprints of his works.

The Present State and Future of Artificial Intelligence
With the book Superintelligence (Oxford University Press, 2014), a New York Times bestseller, Nick Bostrom changed the global conversation on the coming machine intelligence revolution.  It has stimulated research efforts around the world, and deeply influenced the worldview of some of the leading practitioners.  In this (highly visual) talk, Bostrom explains the advances that have been taking place in artificial intelligence since the book came out.  As Director of the newly created Strategic Artificial Intelligence Research Center at Oxford University, which works with some of the world’s foremost AI developers and research groups in industry and academia in the US and UK, Bostrom is in a unique position to draw out the implications of what may become the most important technological transition in human history.  (The level of technicality in this speech, and the balance between near-term versus longer-term impacts, can be adjusted to fit audience requirements.)

The Future of Humanity
This talk zooms out and discusses how to structure our thinking about the really big picture—the key transitions in history that fundamentally changed the human condition, and the prospects of technological transformations, existential risk, and posthumanity that might lie ahead.  It also covers what roles machine intelligence and biomedical enhancement may play in this.  This talk (which includes vivid presentation slides) by Professor Nick Bostrom draws on his unique body of work over two decades in many relevant areas, including his books Anthropic Bias, Global Catastrophic Risk, Human Enhancement, and the New York Times bestseller Superintelligence: Paths, Dangers, Strategies.  Some of the background of this work was described in a recent long-form feature profile of Bostrom in the New Yorker (http://www.newyorker.com/magazine/2015/11/23/doomsday-invention-artificial-intelligence-nick-bostrom).

Conversation with Professor Nick Bostrom
Nick Bostrom invites a discussion with the audience (or with a moderator) to explore any of a wide range of topics concerning the big picture for humanity, technological trends, risks, and future prospects for civilization.  This format gives the audience the opportunity to interact with a commanding mind which has been researching and thinking about these topics for two decades.  As the founding director of Oxford University’s Future of Humanity Institute, Professor Bostrom leads a research group of about twenty mathematicians, computers scientists, philosophers, and engineers, doing serious research in an area that traditionally has been dominated by  inspirational speakers and “business futurists”.  The effect on the audience is an expansion of cognitive horizons and simple intellectual delight: people will be thinking and talking afterwards.  The range of topics covered can, within some limits, be adapted to fit audience interest.)

Macrostrategy
How do present actions link to long term outcomes?  What concretely should you do if you have a specific long term goal (such as accomplishing as much altruistic good as possible)?  Is the future veiled in a fog of chaos and unpredictability such that we are essentially clueless about the long term consequences of our actions?  Or are there specific levers that we can reasonably expect will have astronomically large and predictable effects?  In this talk, Nick Bostrom, professor at Oxford University, best-selling author, and director of the Future of Humanity Institute, delivers vivid new insights into how to think systematically about how to achieve positive outcomes in a world of profound uncertainty and hidden crucial considerations.

Technological Trends and Revolutions: Getting Smarter
The neolithic revolution (agriculture) and the industrial revolution changed the human condition more than any events in history.  Today we may be approaching a third technological revolution—the transition to superintelligence.  Professor Bostrom reviews technical ongoing advances along several paths that lead to the creation of greater-than-human general intelligence, including biomedical cognitive enhancement, improvements in epistemic institutions, and advances in artificial intelligence, and tells the real story of what is going on behind the hype and media misconception.  Professor Bostrom leads a team of 20 eminent computer scientists, mathematicians, engineers, and philosophers at Oxford University in the unique Future of Humanity Institute, whose work is changing the global dialogue on the future of technology.  He is the author of the New York Times bestseller Superintelligence (Oxford University Press, 2014), and he is widely regarded as one of the most technological thinkers in the world today.  Depending on audience preferences, this presentation can focus either on the big picture or on nearer-term technical advances and business-relevant developments.