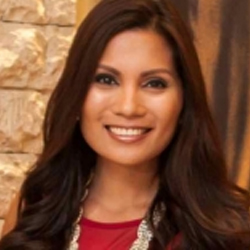 With nearly fifteen years of experience, Patricia Bermudez Hizon is one of the more seasoned in the field of sportscasting in the Philippines, having the distinction of being the first female basketball anchor for television, and having covered numerous international and local sporting events for tri-media, interviewing some of the top athletes in the world.

She has provided commentary for various disciplines in the Olympic Games, Asian Games and South East Asian Games, and was a courtside reporter for the Philippine Basketball Association for almost 10 years before earning the anchor seat. She also became the editor-at-large for a basketball magazine.

Her writing stint had her juggling a weekly column on a broadsheet, contributing to various magazines and websites, including Yahoo-Philippines. Currently, she is writing the “So Can You” book series which is about struggles, success and finding purpose, aimed at providing real life worthy heroes theyounger generation can emulate and draw inspiration from.

Patricia started as a news presenter for the People’s Television Network and hosted a public affairs program which focused on helping the needy. This drove her to start a foundation that inculcates volunteerism amongst the youth called “Everyday Is Your Birthday Foundation”. She has also taken on the key role as a director of the “High Five Hope Foundation” which teaches values and gives educational opportunities to street kids around the country through sports.

Patricia’s earlier stints on television has brought her around the country as a travel show host, and writer-producer for what is now known as the Living Asia Channel which was an exciting opportunity for someone who spent most of her life living in Montreal and Toronto, Canada where her family is from.

Patricia gets to share her experiences as a wife, and a parent through various speaking engagements, and is an ambassador for the Beauty, Brains and Breastfeeding campaign supported by UNICEF.

A highly sought after events host, Patricia has had the opportunity to work with some of the biggest companies and globally

known brands in the Philippines. She has also endorsed numerous products. She is also currently the head for Advocacy and Marketing for a utility company and is the communications director for the Philippine Popular Music Festival.

In between all that she does, she loves to play golf, swim, bike, run and is starting to play ultimate frisbee and dabbles in photography.