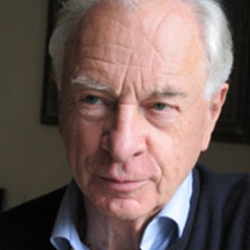 Adam is a journalist and former MEP but is now best known as the author of the remarkable bestseller “When Money Dies”, about the crisis of hyper-inflation in Germany in the 1920s, where Germany’s currency became effectively worthless.

Adam wrote the book in the early 1970s when the global economy was buckling in the wake of the first oil shock – which killed growth and pushed prices up. “When I started researching it in 1973, inflation in the UK was about 10 per cent, and when the book came out in 1975 it was nearly 25 per cent,” Adam says. “Somebody said, ‘we must go back and look at what happened in the 1920s when prices got out of ­control’.” The book tells the story of Germany’s economic collapse after the first world war, which culminated in the mind-boggling inflation of late 1923 – a dreadful time when the number of marks to the pound was at one point equivalent to the number of metres from the earth to the sun.

In the last few years, with the banking crisis and quantative easing, "When Money Dies" has returned to fashion among financiers and governments all over the world. The book is a classic social historical study of what can happen when public spending gets out of control. The book has now become a cult with second-hand copies trading for up to $1,600 in the US earlier in 2010. It was also reported in the Sunday Times that Warren Buffett was tipping the book. This news went viral with the international press calling Adam 'Warren Buffett's lost economic guru'. Warren Buffet disowns this rumour but the re-issued book is selling in vast quantities, including two versions in Chinese.

Adam graduated in history at Cambridge, and later became a journalist with the Glasgow Herald, the Statist, and The Times. He was a Member of the European Parliament for West Strathclyde from 1979 to 1984, a Special Adviser to Geoffrey Howe at the Foreign Office on Europe from 1984 to 1989, and a consultant on European affairs for international industry and commerce including Time Warner, Mitsubishi, Alfred Dunhill, and Richemont.

He has written five books including three novels; many articles and pamphlets; three musical comedies; and much light verse.