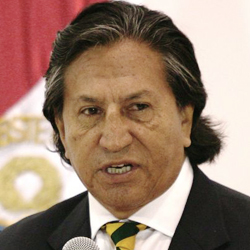 Alejandro Toledo was President of Peru from 2001-06. During this time the Peruvian economy grew at an average rate of 6%, making it one of the fastest growing economies in Latin America.

During his five-year term, the central aim of Toledo’s presidency was the fight against poverty through investment in healthcare and education. As a result of sustained economic growth and social policies directed to the poorest of the poor, extreme poverty was reduced by 25% in five years, and employment rose at an average rate of 6% from 2004-06.

Toledo grew up in extreme poverty in a family of sixteen siblings. At the age of six, he worked as a street shoe shiner and also sold newspapers and lottery tickets to supplement the family income. Thanks to a series of accidental opportunities, he was able to escape from poverty and attend the most prestigious academic centers of the world. He is the first Peruvian president of indigenous descent to be democratically elected in five hundred years.

Toledo has an MA in Economics and a Ph.D. in the Economics of Human Resources from Stanford University. During his academic career, he was a Visiting Scholar at Harvard University and a Research Associate at Waseda University in Tokyo. Before becoming President, Toledo worked for the World Bank and the Inter-American Development Bank in Washington, and the UN in New York.

After finishing his term as President, Toledo returned to Stanford for three years, where he was a Fellow at the University’s Center for Advanced Study in the Behavioral Sciences, and also a Payne Distinguished Visiting Lecturer at the Freeman Spogli Institute’s Center on Democracy, Development, and the Rule of Law.

He also founded and continues to serve as the President of the Global Center for Development and Democracy, which is based in Latin America, the United States, and the European Union. In 2009-10 Toledo was a Distinguished Visiting Scholar at the School of Advanced International Studies at Johns Hopkins University in Washington, D.C., and also a Non-Resident Senior Fellow in Foreign Policy and Global Economy and Development at the Brookings Institution.