Alexander Blass is an internationally acclaimed American innovator. He has traveled to 60 countries and appeared in hundreds of media outlets. He is the grand prize winner of the Daily Record’s Top Innovator of the Year Award, which credited him with “revolutionizing charitable giving” for inventing person-to-person “crowd” fundraising technology, which rapidly spread worldwide on the Internet and has helped countless people. He presently serves as CEO and President of the Innovation Institute of America, based near Washington, DC.

Blass’s clients span five continents across numerous industries, and include some of the world’s largest and most prestigious companies such as IBM, Mastercard, KPMG, Saudi Aramco, Travelport, Statoil, and many more. He is the guest keynote speaker and masterclass presenter at leading conferences on innovation/creativity, leadership/change, business development and entrepreneurship. Examples include the Abu Dhabi Innovation Forum, KPMG Annual Convention, the World Management Forum, the Mastercard Innovation Forum, the Aramco Innovation Convention, the European Conference on Creativity and Innovation, the Stars of Business Awards in Dubai, the Kingdom of Saudi Arabia Entrepreneurship Summit, EPIC in New York, E-VOLVE in Mexico, HR SUMMIT in Singapore, INNOCONF in Malaysia, the Business Leadership Forum in South America, the IIT Bombay Entrepreneurship Summit, and IBM INNOVATE in India to an audience of 2,000 people.

He received the Baltimore Business Journal’s Top 40 Under 40 Executives Award and the Daily Record’s Influential Marylanders Award. He was honored as Entrepreneur-in-Residence at the Wharton School of Business.

Previously, Blass was a venture capitalist, strategy consultant, and software developer, beginning his career at KPMG Consulting. He has worked with leading organizations on opportunities totaling over $1 billion, and made investment recommendations on over $100 million of emerging technologies for the U.S. government as an invited expert on many investment panels at the National Science Foundation.

Blass received an MBA from Oxford University in England. He also holds a Master of Science degree in electrical engineering from the University of Pennsylvania, where he concurrently studied at the Wharton School of Business. 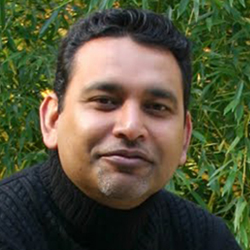