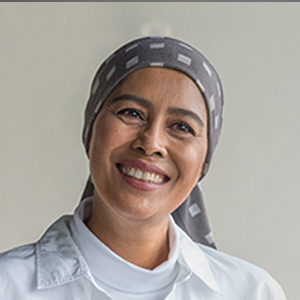 Hailed from Batu Pahat, Johor in Malaysia – 53 year-old Anita Yusof is the first Muslim woman to ride around the world and the first Malaysian ever to be inducted into the Asia Book of Records for the longest bike solo ride. In less than two years of riding she has already earned a place in the record books for some of her adventure riding exploits.

Her greatest challenge, which took a whole year, involved crossing North America, South America, Europe and Asia with the aim of reaching a noble objective: to earn an entry into the Malaysian Guinness World Records as the first woman to travel around the Globe solo by motorcycle.

Anita, who works as a lecturer in the Physical Education Department at IPG Campus Ipoh, began her journey from Putrajaya on September 11, 2015, returning home a year later through Bukit Kayu Hitam on September 16, 2016. Her incredible feat includes riding through 40 Countries over 4 Continents, racking up a total distance of 65,369 kilometres, riding solo with her loyal FZ150i.

Anita has been an avid traveller all her life. Preferring solo travelling to large groups, Anita has always travelled by herself, and had previously preferred backpacking, until she learned to ride motorcycles. She first learned to ride a motorcycle in April 2012, and in 2015, after just three years’ riding experience, she embarked on her first Round The World adventure she called ‘Global Dream Ride’. At the time, she admits she lacked both the off-road riding skills and funding she needed, but she was determined to do it anyway as a personal feat.

Givi – Italy’s leading motorcycle brand appointed Anita as their brand ambassador the same year she completed her ride in 2016. Levi’s Global has also chosen her to represent Malaysia in “I Shape My World” campaign, a global initiative celebrating women from across 10 countries who inspire other women through their actions.

Anita published her books “Kembara Solo Stans Asia Tengah and the “Global Dream Ride” series to share her adventures on motorcycle around the world. A portion of the proceeds will be used to help under privileged children in the countries she visits. Sharing her adventure stories is hugely satisfying for Anita to inspire others to confront their fears and step out of their comfort zone.

Anita is currently stationed in Tanzania due to the COVID-19 pandemic until she could resume her journey in hope to complete her 2nd world tour to complete 70 countries in 7 continents.