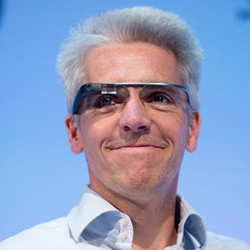 Dan Cobley is an entrepreneur and investor in innovative tech startup businesses, focusing on financial services. He is CEO of Brightbridge Ventures, a FinTech-focused venture builder which is part of Blenheim Chalcot. Through this role he has co-founded and now chairs three fast-growth FinTech companies; SalaryFinance, BusinessFinanceCompared and ClearScore, and he sits on the boards of Liberis, Modulr and Onfido.

Until late 2014, Cobley spent over 8 years at Google. For the last three years he was Managing Director, UK & Ireland – the biggest market for Google outside the US and the most advanced major country in terms of e-commerce and online advertising spending. He was promoted to the UK MD role after five years in Google marketing, first as Marketing Director, UK, Ireland and Benelux and then as VP Marketing, EMEA.

Cobley is a regular keynote speaker at conferences; speaking on the disruptive power of FinTech, technology, innovation, and Google’s unique approach to business. He is also an accomplished moderator, interviewer and after-dinner speaker. He has shared his thoughts on Physics and Marketing at the TED conference and with over a million people online. He was named as number 3 in Wired UK top 100 list 2012 and number 2 in Evening Standard 1000 Most Influential Londoners; Digital Innovators, 2012. He appeared on BBC’s Tomorrow’s World as a technology commentator and helped Alan Sugar choose his 2014 Apprentice.

Cobley has a first class degree in physics from Oxford and a masters in management from Cambridge. He is a trustee of the charity Technology Trust, and is an informal advisor to the CEO and board of Santander UK on all things FinTech.