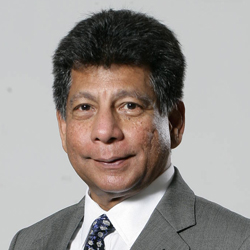 Dr. Munir Majid obtained his B.Sc (Econ) from the London School of Economics and Political Science (LSE) where he also obtained his Ph.D in International Relations. He taught at the Department of International Relations in LSE in LSE and he is Visiting Senior Fellow. He was research analyst for Daiwa Europe NV in London and joined the New Straits Times Press (NST) where he published numerous articles on national and international politics, and economics. Nowadays he writes a regular fortnightly column in The Star, Malaysia's leading English language newspaper.

He was invited by the Government of Malaysia to establish and become the first and founding Executive Chairman of the Securities Commission in 1993, where he served for two terms until 1999. During this time he was also the Chairman of the Emerging Markets Committee of IOSCO (International Organization of Securities Commissions), and was a member of the organization’s Technical and Executive Committees. In June 2004, Dr. Munir joined the Malaysia Airlines Board of Directors and in August that year was appointed its Non-Executive Chairman. He became Chairman of Bank Muamalat Malaysia Berhad, an Islamic Financial institution, in 2008. In February 2014, Dr Munir was appointed chairman of CIMB ASEAN Research Institute and also joined the board of the Institute of Strategic and International Studies (ISIS) Malaysia.

He is chairman of the ASEAN Business Advisory Council - Malaysia Chapter and is on the Financial Services Talent Council of The Central Bank of Malaysia. As co-chair of the Malaysia America Foundation, he works to deepen relations between the two countries. In December 2005, he was made an Honorary Fellow of the LSE and in 2008 he was appointed Visiting Senior Fellow at LSE IDEAS (Centre for International Affairs, Diplomacy and Strategy) where he started the Southeast Asia International Affairs Programme and headed it until 2012. He has written for IDEAS publications and published in International Politics, a British academic journal.