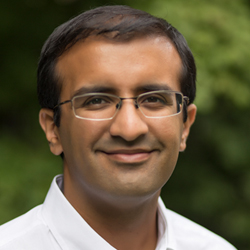 Raj Panjabi was nine years old when civil war broke out in his native country of Liberia. His family fled, eventually resettling in High Point, North Carolina. As a medical student in 2005, he returned to Liberia. He was shocked to find a health care system in total devastation. Only 50 doctors remained to treat a population of four million.

Panjabi is a physician in the Division of Global Health Equity at Harvard Medical School, Brigham and Women's Hospital and an advisor to the Clinton Global Initiative. He was ranked as one of "The World’s 50 Greatest Leaders" by Fortune in 2015 and named to TIME's list of the "100 Most Influential People in the World" in 2016. As the winner of the 2017 TED Prize, Raj is creating the Community Health Academy, a global platform to train, connect and empower community health workers. The academy will be prototyped in Liberia and a handful of key countries, and will go global from there.