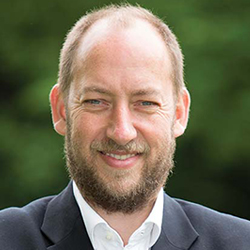 Duncan Goose is the founder of Global Ethics and the One Water brand. He has a background in advertising and marketing and was formerly a board director of a WPP subsidiary which he saw through a buy-out, and subsequent merger into the J Water Thompson Group.

In 2004 he left the business to form a not-for-profit organisation called Global Ethics whose primary remit is to raise funds for humanitarian projects in developing countries by harnessing the power of everyday consumerism - rather than focusing on charitable models. By connecting products with human needs – on a like-for-like basis, he hopes to change the way we view our everyday purchases.

The first initiative was to launch a bottled water brand, called One Water, which donates all its profits to fund sustainable water solutions for communities in Africa. One Water was the official water for both Live8 and Make Poverty History and continues to change the way in which people consider buying water in the same way that Fairtrade has changed buyer behaviour in many different fmcg categories. Global Ethics and The One Brand have ambitious plans for the future with developing other like-for-like initiatives in the area of fmcg, financial services and technology. One Water has also become the global water brand of choice for Virgin Airlines.

Between 1998 and 2000 Duncan fulfilled a life-long ambition to ride a motorbike around the world. It was because of the experiences he encountered on this odyssey, not least being caught in the middle of Hurricane Mitch, which killed over 30,000 people and did US$4bn worth of damage in Honduras, that he decided to form Global Ethics.

Duncan has won numerous prestigious awards including the European Entrepreneur of the Year Award, a Great Briton award, the Chairman’s Award at the Institute of Directors Awards and has been awarded an Honorary Doctorate. During his career he has also been on the board of the John Lewis Foundation, Coventry University and currently sits on the board of Malaria No More.

He says one of his proudest achievements was to put £1m on the ground in East Africa four days after the worst drought for 60 years had been declared. It kept 250,000 alive long enough for governments and aid agencies to intervene.