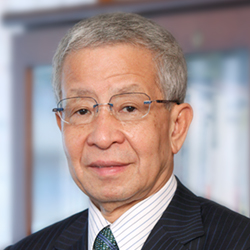 Dr. Sakakibara is a Professor of Aoyama-Gakuin University in Tokyo from 2010. Professor Sakakibara worked for the Ministry of Finance for more than 20 years, most notably as Vice Minister of Finance for International Affairs. He has broad and valuable experience in Government, especially in the area of international finance. He has shown superior ability in policy making and in consensus building among the international community, earning the sobriquet ‘Mr. Yen’ because of his influence over the currency markets.

He is renowned as a key advisor to The Democratic Party of Japan and very influential to Japanese government as a thought leader in Japan. Professor Sakakibara frequently appears on Japanese TV programs and he has also been quoted by The Economist, The Wall Street Journal, The Washington Post, The Nikkei, USA Today, Bloomberg/BusinessWeek, Forbes, BBC, CNBC as well as other leading media in the U.S., Japan, and Europe. He is also served as a President of Institute for Indian Economic Studies.

Prof. Sakakibara received a Ph.D. in economics from the University of Michigan. His expertise and ability as an economist in the area of international finance was enhanced through his experience as an economist in the IMF. He has served as Associate Professor of Economics, Institute for Policy Science, at Saitama University and Visiting Associate Professor of Economics, Economics Department, at Harvard University. He is the recipient of numerous awards, including the Taylor’s Award from the University of Michigan and the Bintang Mahaputra Utama from the Government of The Republic of Indonesia.