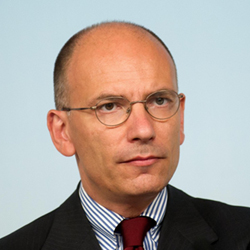 Enrico Letta was Prime Minister of Italy from 2013-14, leading a grand coalition comprising the centre-left Democratic Party, the centre-right People of Freedom, and the centrist Civic Choice. A Europhile on the moderate side of the PD, his rapid ascent to the post of Prime Minister was as unexpected as his downfall, which was prompted by his own party leader, Matteo Renzi.

In 2013, after weeks of post-election stalemate, President Napolitano asked Letta to form a government, after party leader Pier Luigi Bersani had failed. The fact that he drove himself to the presidential palace in his own Fiat car to accept the prime ministerial mandate was seen by some as a statement against the extensive privileges for which Italian politicians had become known.

He was keen to reform the parliamentary system, reduce the number of deputies, and change Italy's electoral law in order to make politics more stable. By December, the Democratic Party had a charismatic young leader in Matteo Renzi. The new PD leader met Silvio Berlusconi the following month to discuss the prospect of electoral reforms and within weeks he was openly criticising the slow pace of change leaving Letta increasingly isolated. Following tensions with his left-wing rival Matteo Renzi, Letta announced he would resign as Prime Minister. Later he moved to Paris to teach Europe and populism at Sciences Po University.

Earlier in his career, Letta worked in the finance ministry as Italy prepared to join the Euro, before being named minister for European Affairs in 1998 at the age of 32 - the youngest cabinet minister in Italy's post-war history. He later served as industry minister and as minister for foreign trade before the centre left lost power in 2001.

Born in Pisa in 1966, Letta undertook a doctorate in European Community law before heading the European youth wing of the centre-right Christian Democrats from 1991-95. When Silvio Berlusconi entered politics in 1994, the Christian Democrats split and Letta sided with a new centre-left coalition headed by Romano Prodi.