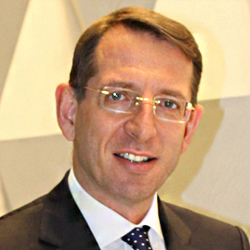 As one of the world’s significant voices upon corporate globalization and Asian business, Dr. Frank-Jürgen Richter influences major business and governmental decisions with his public comments. With his management consulting company Horasis, he assists multinational corporations to craft strategies to develop into real global champions. In his book Tigers Leap: Asian Business Goes Global, Frank-Jürgen Richter encourages organizations to grow globally in order to thrive. He early focused on Asia as a springboard for globalization. An exceptionally gifted thinker and speaker- and as a seasoned advisor of several companies with global reach, Richter has an unrivaled reputation for his ability to use distinctive scenarios on how to map the future to illustrate his proposals.

Dr. Frank-Jürgen Richter is the Chairman of Horasis: The Global Visions Community. Horasis is an independent international organization committed to enacting visions for a sustainable future. Horasis is using its unrivalled history of partnership with corporations from emerging markets to create a powerful platform for cooperation between emerging and developed markets. The flagship events are the Horasis Global Meeting as well as regional summits focusing on China, India, Russia and the Arab world.

Prior to founding Horasis, Frank-Jürgen Richter was the World Economic Forum’s Director in charge of Asian affairs. Under his leadership, the Forum’s Summits in Asia and the Asia part of the Annual Meeting in Davos evolved to facilitate the exchange of expertise between leaders in business, government and civil society. He also had a distinguished career with Multinational Corporations in Asia and Europe. He lived, studied and worked in Asia for almost a decade, in Tokyo and more recently in Beijing, where he developed and managed the Chinese operations for European Multinationals.

Frank-Jürgen Richter was educated in business administration, economics and mechanical engineering in Germany, France, Mexico and Japan. He is still an active scholar: he has authored and edited several books on Asian economies and international business. Richter is an applied management scientist, whose primary interests are international management and economic development, with strong secondary interests in political economy and geopolitical issues. Understanding economic institutions in general and firm-level organizations in particular, is central to his public speaking.

He has addressed these subjects before the Brookings Institute, Harvard University, Asia Society, Japan Society, Royal Institute of International Affairs, Pacific Basin Economic Council (PBEC) and several high-level CEO Summits. His writings appeared in the financial and regional press, such as The International Herald Tribune, The Wall Street Journal, The Far Eastern Economic Review, The Straits Times and the South China Morning Post. He has been interviewed by several publications and appeared on CNN, BBC, CNBC as well as the Voice of America.