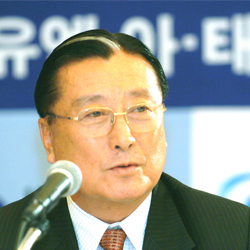 Kim Hak-Su is the Executive Secretary of the Economic and Social Commission for Asia and the Pacific. He is also Chairman of the Asia Economic Conference Forum held annually in Seoul, Korea. Global leaders attend this forum to express their views and ideas.

Kim's background in government banking was as the London Representative of the Bank of Korea (the Republic of Korea's central bank). Highlights of his private sector career include being Executive Director and President of Daewoo International Steel Corporation in New York, and as President of the Hanil Banking Institute in Seoul.

He has a special affinity for the Pacific, having served in the 1980s as United Nations Chief Planning Officer and Chief Technical Adviser attached to two Pacific island developing countries, Vanuatu and the Solomon Islands. As Secretary-General of the Colombo Plan, based in Colombo, Sri Lanka (1995-1999), he revitalised the 24-member intergovernmental Colombo Plan for Cooperative Economic and Social Development in Asia and the Pacific, stressing human resources development and focusing on co-operation.