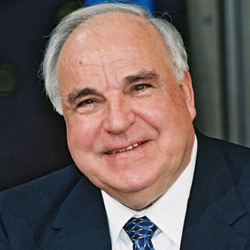 Helmut Kohl, the leader of the Christian Democrat Party, became chancellor of Germany in 1982. In 1998 Germans chose Social Democrat Gerhard Schröder as chancellor, ending a 16-year-long rule by Helmut Kohl that oversaw the reunification of Germany and symbolized the end of the cold war in Europe.

He held the position of chancellor longer than anyone in post-war German history.

An economic upswing in 1986 led to Helmut Kohl's reelection. The fall of the Communist government in East Germany left only Soviet objections to German reunification to be dealt with. On the night of Nov. 9, 1989, the Berlin Wall was dismantled, making reunification all but inevitable. In July 1990, Kohl asked Soviet leader Gorbachev to drop his objections in exchange for financial aid from (West) Germany. Gorbachev agreed, and on Oct. 3, 1990, the German Democratic Republic acceded to the Federal Republic, and Germany became a united and sovereign state for the first time since 1945.

In 1960, Helmut was elected into the municipal council of Ludwigshafen where he served as leader of the CDU party until 1969. In 1963, he was also elected into the parliament of Rhineland-Palatinate and served as leader of the CDU party in that legislature. From 1966 until 1973, he served as the chair of the CDU, and he was also a member of the Federal CDU board. In May 1969, Kohl was elected minister-president of Rhineland-Palatinate. Also in 1969, Kohl became the vice-chair of the federal CDU party. In the 1976 federal election, Kohl was the CDU/CSU's candidate for chancellor. In October 1982, the CDU proposed a vote of no confidence in the Government The motion carried, and the Bundestag voted in a new CDU/CSU-FDP coalition cabinet, with Helmut Kohl as the chancellor.