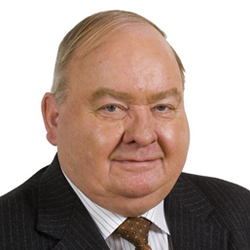 Henning Christophersen is a renowned Global Economist. Formerly the vice-president of the European Commission 1985-1995, Christophersen had responsibility for the economic and financial affairs of the Union. He is one of Denmark's best known and most respected politicians, having held the posts of Foreign Minister, Finance Minister and Deputy Prime Minister.

After graduating in Economics at Copenhagen University, he was chief adviser to Denmark's Chamber of small and medium size companies, prior to entering parliament as a liberal in 1971. In 1978 he became President of the Liberal Party and from 1979-1982 a member of the Board of the Danish Central Bank.

While a vice-president of the Commission he was responsible for the European Monetary Union (EMU) and the early consultations and strategic planning for the proposed single European Currency (ECU).

Since 1989 he has been the EU's representative in a number of supranational organisations, including the OECD, IMF, G7, EBRD and the EIB. He is a member of the Danish Council for the European Policy and recently retired as chairman of CMO Holding (established by Unibank).

Christophersen is a Member of the Board of the 2nd largest bank in Scandinavia - Danske Bank and he is an advisor in European Financial Services Action Plan. Until 2007 he was also Chairman of the Energy Charter Conference.

Henning Christophersen draws on his considerable expertise and own personal experiences to concisely analyse the current worldwide political and economic situation, giving unparalleled insights into the 21st century global landscape.