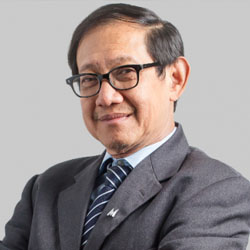 Hermawan Kartajaya, the current President of World Marketing Association, is one of the “50 Gurus Who Have Shaped The Future of Marketing” appointed by The Chartered Institute of Marketing-United Kingdom (CIM-UK).

He is a unique combination of a thinker of strategic business concepts (particularly in marketing) and a practitioner. He entered the international league of marketing with his own models and received an acknowledgement from Prof. Philip Kotler, the globally-renowned guru of Marketing, and Prof. Warren J. Keegan, the guru of Global Marketing. He holds a Master of Science (majoring in International Marketing) from the University of Strathclyde, United Kingdom.

Hermawan Kartajaya is also an internationally acknowledged speaker and author. As an authority in Marketing and Southeast Asian Business, he has been invited as a speaker and guest lecturer by many national and international seminars, conferences, and universities around the world, from Asia to the United States to Europe. Recently, he has lectured for Nanyang MBA for its Marketing Management (June 2006) and Strategic Brand Management (March 2007) courses. He is also the lecturer for the Nanyang Fellows Programme with Hooi Den Huan (Associate Professor, Nanyang Business School), starting from 2006/2007 batch. He continues to travel extensively to Southeast Asian countries and continually contributes his expertise to the ASEAN marketing community.

As a speaker/trainer, some examples include being a trainer for Diplomats of Trade, Tourism, and Economy in East and Central Europe in Bucharest, 2006; and a panelist in the Business Action in Asia Conference, by Commonwealth Business Council (CBC), and supported by Department for International Development (DFID) UK, London, 2006. In local and international events, he is often given the honorable position as the keynote speaker. He recently spoke for AIESEC NTU’s Workshop on “Branding, Innovation and Corporate Social Responsibility” in March 2007 as the main speaker.

He has authored many books and his marketing articles have also appeared in numerous international publications. He has co-authored five books with Prof. Kotler, four of which are Repositioning Asia: From Bubble to Sustainable Economy (John Wiley), Rethinking Marketing: Sustainable Market-ing Enterprise-Text (Prentice-Hall), the recently launched Think ASEAN: Rethinking Marketing towards ASEAN Community 2015 (McGraw-Hill), and the forthcoming Values-based Marketing: A Model for Sustainable Companies. His own book, Marketing in Venus (translated into 5 languages) has been published in China by the Kotler Marketing Group, Beijing in May 2007. He is also a regular contributor for Asia Inc, Kompas (Indonesia), The Point (Indonesia) and Marketing Magazine (Vietnam).

Besides being the only Indonesian and only non-professor who attended the Harvard Business School’s Executive Education Program (Program on Case Method and Participant-Centered Learning, he has also attended a wide range of executive programs from the Wharton School, Kellogg School of Management, University of Michigan Business School, INSEAD and the University of Chicago.

Hermawan Kartajaya is a multi-ranging award recipient. Recently, he is named as one of the Top 50 People who serve as role models and whose ideas contributed greatly to the business industry development of Indonesia, chosen by SWA magazine, Indonesia. In 2004, he was regarded as “The Most Powerful People in Business 2004”, Marketing category, chosen by SWA magazine, Indonesia and Indonesia’s Best-Selling Author, during Gramedia’s 30th Anniversary Award.

Some of his previous and current consultancy clients are Telkom, Bank Rakyat Indonesia, National Postal Service, Yamaha, Indosat, Lexus, and Indofood Sukses Makmur. He is also the advisor for the Sultan of Jogjakarta in marketing the region. He is also helping the Police of Indonesia in the capacity as Expert Advisor of the Chief of Police (Penasehat Ahli Kapolri) and lecturer of the School of High-Rank Police Officers (Sekolah Staf and Perwira Tinggi Polri), and sits at the Board of Advisors for Air Asia Berhad, Malaysia, since 2004. He is a member of Board of Trustee of University of Indonesia since 2007 and being the Advisor of Sharia Banking of Central Bank of Indonesia. Hermawan is also highly active in many community service activities. He is in the United Nations Children’s Fund (UNICEF), the Conservation International, the Leadership for Environment and Development International (LEAD), and the Rotary Club. He initiated and organizied the Celebrities for Kids on National Mother’s Day, a UNICEF charity event for the children of Indonesia.