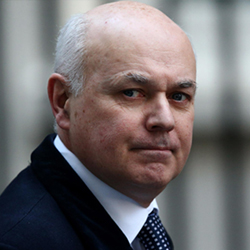 The Rt Hon Iain Duncan Smith MP was first elected as the Member of Parliament for the constituency of Chingford and Woodford Green in London on 1st April 1992. In his first Parliament, June 1992-97, he opposed the Maastricht Treaty believing that if it passed, it would over a period of time, be followed by a series of other treaty changes that would change the relationship between the UK and the EU that would eventually make it untenable for the UK to be a member. He was also a member of a number of Select Committees during that time.

Between 1997 and 2001, he was Shadow Secretary of State for Social Security and then Secretary of State for Defence. From 2001 to 2003, he was leader of the Conservative Party and then from 2003, having stepped down as leader of the Conservative Party, he set up the Centre for Social Justice (CSJ). The CSJ was an organisation dedicated to focusing on the problems facing those in the lowest income groups in society. It published a series of reports, perhaps the most significantly, “Breakthrough Britain: Ending the Costs of Social Breakdown”, focusing on the five pathways to poverty and a Conservative way to implement social justice and improve the quality of the poorest in society. It is also worth noting that in 2013, the CSJ published the paper on modern day slavery, “It Happens Here: Equipping the United Kingdom to Fight Modern Slavery”, which subsequently led to Theresa May enacting legislation on this matter.

In 2010, Duncan Smith became Secretary of State for Work and Pensions, a position he held until he resigned in a dispute with the Chancellor over his determination to reduce his expenditure on disability benefits by over £1 billion. During his time as Secretary of State for Work and Pensions, he undertook the most significant programme of welfare reform in modern times, transforming the benefit and pension systems, as well as employment services and support. Perhaps the most significant reforms were the introduction of Universal Credit, (bringing together the six unemployment and sickness benefits), the Work Programme, for the first time bringing together private and voluntary sectors to get unemployed people back into work, and the introduction of the Single Tier Pension simplifying the State Pension.

He took a lead role in the Vote Leave campaign ahead of the EU referendum on 23 June 2016 appearing many times in the media and public debates and is now working alongside colleagues to ensure the Government achieves a smooth and rapid exit from the EU and forms a new relationship based on trade, continuing friendship and cooperation.

Before entering politics, he served in the Scots Guards from 1975 to 1982. During this time, he saw service in Northern Ireland and Rhodesia/ Zimbabwe. After leaving the army, he worked in industry, first with the GUC and then as a Director of a property company and subsequently as a Director at the publishing company, Jane’s Information Group.