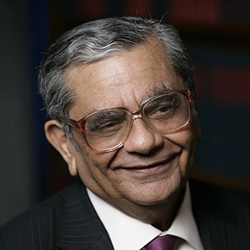 Professor Jagdish Bhagwati, is University Professor at Columbia University and Senior Fellow in International Economics at the Council on Foreign Relations. He has been Economic Policy Adviser to Arthur Dunkel, Director General of GATT (1991-93), Special Adviser to the UN on Globalization, and External Adviser to the WTO. He has served on the Expert Group appointed by the Director General of the WTO on the Future of the WTO and the Advisory Committee to Secretary General Kofi Annan on the NEPAD process in Africa, and was also a member of the Eminent Persons Group under the chairmanship of President Fernando Henrique Cardoso on the future of UNCTAD.
Professor Bhagwati has published more than three hundred articles and has authored or edited over fifty volumes; he also writes frequently for The New York Times, The Wall Street Journal, and The Financial Times, as well as reviews for The New Republic and The Times Literary Supplement. He founded the Journal of International Economics in 1971 and another journal, Economics & Politics, in 1989.

Professor Bhagwati is described as the most creative international trade theorist of his generation and is a leader in the fight for freer trade. His most recent book, In Defense of Globalization (Oxford, 2004), has attracted worldwide acclaim. Five volumes of his scientific writings and two of his public policy essays have been published by MIT press. The recipient of six festschrifts in his honor, he has also received several prizes and honorary degrees, including awards from the governments of India (Padma Vibhushan) and Japan (Order of the Rising Sun, Gold and Silver Star).

A native of India, Professor Bhagwati attended Cambridge University where he graduated in 1956 with a first in Economics Tripos. He then continued to study at MIT and Oxford returning to India in 1961 as Professor of Economics at the Indian Statistical Institute, and then as Professor of International Trade at the Delhi School of Economics. He returned to MIT in 1968, leaving it twelve years later as the Ford International Professor of Economics to join Columbia. He is married to Padma Desai, the Gladys and Ronald Harriman Professor of Comparative Economic Systems at Columbia University and a scholar of Russian and other former socialist countries' transition problems.