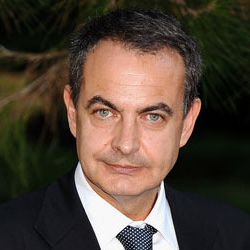 The twice-elected President of the Spanish Government

The twice-elected President of the Spanish Government, José Luis Rodríguez Zapatero, has been a major force in the deep social changes in Spain and in the first line of the anti-crisis measures both in Europe and in Spain.

Known also for his international work in favour of world peace and cultural understanding, as well as for Human Rights, Rodríguez Zapatero is the father of the Alliance of Civilisations, international initiative which was adopted as an official United Nations program in 2007. He has also been at the forefront of the fight against terrorism, both national and international, being a corner stone in the defeat of the terrorist group ETA after 40 years of activity in Spain and France.

He has been a Member of the Lower House of the Spanish Parliament since 1986, a legislature in which he was the youngest MP. Later, in 1996, he became Spokesperson in the same House on the Public Administrations Committee.

In 2000, he was elected as General Secretary of the PSOE. Four years later he won the general elections and became the fifth Spanish President of the young Spanish democracy.

Among the most important measures he took at the head of his first government, aside from forming the first government with parity between men and women in the history of Spain, is the withdrawal of troops from Iraq and pioneering laws of great social importance such as the Gender-Based Violence Act; the Equality Act; the Historical Memory Act or the law allowing same sex weddings.

Within the framework of a policy that would drive to the democratization and transparency of public life, Rodríguez Zapatero increased the powers of the Government and the President of the Government in the two legislative Houses of Parliament and brought about the independence of the Spanish public Radio and Television company (RTVE) by enacting a law that placed its control in the hands of Parliament.

Foreign policy focused on boosting Spain's active presence in Europe and Latin America, without forgetting relations with emerging powers and those regions historically linked to Spain.

In 2008, Rodríguez Zapatero’s party, won the general elections again, obtaining more MP’s than in the preceding elections. The main pillars of the Government's policy in this legislature were budget control, an ambitious agenda of reforms and maintaining social cohesion, with a commitment to an intense social policy.

Achievements during this second terms of office include the historic agreement for the financing of the autonomous regions, approved by the Fiscal and Financial Policy Council, on which all the autonomous regions are represented, and the removal of advertising on RTVE, thus reinforcing its status as a public service, as well as completing the process of the democratization of the State media.

On the political agenda, worthy of mention are the bill on the Sustainable Economy, which establishes the bases for renewing Spain's productive model within the framework of the toughest international economic crisis in recent times. During the course of the legislature, in the first half-year of 2010, Spain held the Rotating Presidency of the EU for the fourth time in its history.