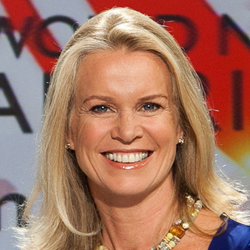 Katty Kay is the anchor of BBC World News America, based in Washington DC. She is also a frequent contributor to Meet the Press and Morning Joe. She is a regular guest host for the Diane Rehm show on NPR.

Prior to taking over as lead anchor, Kay was BBC Washington correspondent from 2002. Her career with the BBC began in Zimbabwe in 1990 where she started filing radio reports for BBC World Service. From there she also covered the end of apartheid in South Africa.

Kay went on to work as a BBC correspondent in London, and later Tokyo, reporting on stories including the Kobe earthquake and the Japanese economic recession. She settled in Washington in 1996 where she took some time out of broadcast journalism to join The Times' Washington bureau before returning to the BBC in 2002.

From Washington, Kay covers the full gamut of American and global affairs – reporting on U.S. elections, the White House, Congress, Wall Street, global economies and world trouble spots. She also witnessed and reported on the huge change in American policy and psyche brought on by the attacks of September 11. Kay was at the Pentagon just 20 minutes after a hijacked airplane flew into the building – one of her most vivid journalistic memories is of interviewing soldiers still visibly shaking from the attack.

Kay is co-author (with Claire Shipman) of two New York Times bestsellers. The latest is The Confidence Code: The Science and Art of Self-Assurance—What Women Should Know. In it they make the case that confidence has roots in genetic hard-wiring but also comes by choice: less people-pleasing and perfectionism and more action, risk-taking, and fast failure. In their first book together, Womenomics: Write Your Own Rules for Success, Kay and Shipman explore how women can create a professional life that meets their needs – and in the process create more profitable companies with happier and more productive employees.

Katty grew up in the Middle East, where her father was a British diplomat and her mother was a journalist. She studied French and Italian at Oxford University and worked as a foreign correspondent in Africa and Japan before settling in the US. She speaks fluent French and Italian and what she describes as rusty Japanese.