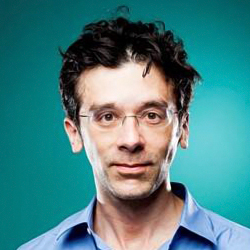 Professor at the MIT Media Lab, and serial entrepreneur, Kevin Slavin has built renowned projects and companies at the intersections of entertainment, games, big data, next-generation technologies, and design.

As Co-founder of Area/Code in 2005, Slavin has been a consistent pioneer in rethinking game design and development around new technologies (like GPS and DNA testing) and new platforms (like Facebook and iOS). Working with MTV, Disney, Nokia, Nike, CBS, and many others.

In 2013, MIT’s Media Lab appointed Slavin to start and lead “Playful Systems,” a new division of the lab. A nascent group, they have worked with the Dalai Lama Center for Ethics and Transformative Values, chess grandmaster Maurice Ashley, and MIT’s Department of Brain and Cognitive Sciences. Their work has attracted global attention, including every major news network and coverage from The Huffington Post, Discovery, Wired and the New Scientist.

In 2013, Slavin also co-founded Everybody at Once, a consultancy focused entirely on how online audiences and fans interact with TV, movies, and sports. The company currently works with BBC America, BBC News, Starz, American Public Media, and the European soccer team Roma.

Kevin spent 10 years as a creative director and planner at some of the largest agencies in the US, and has been named to most of the industry awards, including Creativity Magazine’s Creativity 50.