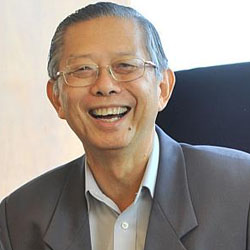 Lim Siong Guan was appointed Group President of GIC in September 2007. The GIC manages the financial reserves of the Singapore government.

He was Chairman of the Singapore Economic Development Board from October 2006 to June 2009. The Board is the Singapore government’s lead agency for planning and executing strategies to enhance Singapore’s position as a global business centre.  Much of its work is attracting international corporations to set up manufacturing and services activities in Singapore as critical links in the global supply chain.  He has been a Professor in the Lee Kuan Yew School of Public Policy at the National University of Singapore since 2005, instructing on leadership and change management, as well as a Senior Fellow of the Civil Service College since 2006.

Siong Guan was the Head of the Singapore Civil Service from September 1999 to March 2005. He has been the Permanent Secretary of the Ministry of Defence (1981-1994), the Prime Minister’s Office (1994-1998), the Ministry of Education (1997-1999) and the Ministry of Finance (1999-2006). In every appointment he introduced innovative policies and practices which enhanced the drive, capacity, capability and performance of the organization. He has chaired the Inland Revenue Authority of Singapore (2004-2006), the Accounting and Corporate Regulatory Authority (2004-2006) and, the Central Provident Fund Board (1986-1994) and has been a board member of many companies including Temasek, the other sovereign wealth fund manager of Singapore.

Siong Guan has co-authored two books with Joanne H. Lim. The first book “The Leader, The Teacher & You – Leadership Through the Third Generation,” touches on leadership and governance while the second book "Winning with Honour" highlights the virtue of honour in one's life.

He is a member of the SwissRe Advisory Panel and of the International Board of the stars Foundation, a Swiss foundation that promotes leadership development for leaders of the next generation.  He chairs the Board of Directors of Honour (Singapore), a charity that seeks to promote the culture of honour and honouring in Singapore.