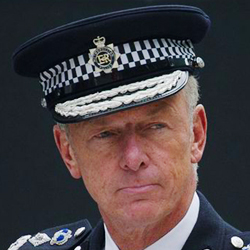 Lord Bernard Hogan-Howe was the most senior police officer in the UK. He led an organisation of nearly 50,000 people with a budget of £3.2 billion.

Lord Bernard's career has been characterised by high achievement, having successfully delivered numerous strategic objectives and effciency improvements while holding weighty appointments with substantial responsibilities. He has a wealth of experience in creating cultural change, developing and implementing new strategies to transform corporate identities. He has built his success on the simple strategy of Total Policing. This involves a war on crime and care for victims.

As Commissioner of the Metropolitan Police and Chief Constable of Merseyside he delivered significant reductions in crime during his 5 years tenure. In London 20% and Merseyside 36%. In both regions he reduced the murder rates, in London by 25%. In London despite a loss of £600 million of budget he uniquely maintained police officer numbers while the rest of England and Wales lost 20,000 police. When taking over the Metropolian Police he inherited a City of 8.4 million people in crisis following the large scale riots of 2011. An organisation in crisis with the loss of half the Management Board and a matter of weeks to plan to deliver a safe city, a safe Olympics and save £600 million.

Despite a 'Severe' threat level and attacks throughout Europe only one terrorist attack got through during his command. The UK police and Security Service partnership is recognised as the best in the world with its profound links to Neighbourhood based community policing.