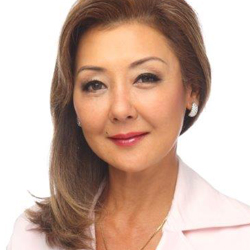 Lorraine Hahn is based in Hong Kong and has twenty years of experience in journalism focused on Asian business issues. Lorraine has developed a renowned reputation as a presenter and talk-show host, demonstrating a strong understanding of Asian economic and political issues. She has interviewed personalities as diverse as the world's top heads of state like Vladimir Putin, Vincente Fox, John Howard, Helen Clark, captains of industry, to international artists like Sir Elton John and golf legend Tiger Woods, as well as moderated business dialogues with some of the of the world's most powerful CEOs. She has been called-upon to be the Master of Ceremony or chairperson of various major events and has been invited by numerous organisations to help MC or moderate their corporate events.

Lorraine is currently working in freelance TV programming. Recently she has developed and anchored a series for environmental awareness for the PBS network in the United States, called "Earth Factor Asia", highlighting environmental issues and solutions in the Asia region. Until 2006 she was host of CNN International's regional chat show, Talk Asia having previously anchored CNN's long-running Biz Asia from 1998 to 2000. She spent 3 years at CNBC hosting its flagship economics and finance program, Business Tonight, as well as The Winners, Talk of Asia and NBC Asia Evening News. She was previously with Television Broadcasts Ltd. (TVB) and Hong Kong's first 24-hour radio station, Metro Broadcasting.

Lorraine has lectured at Hong Kong University and regularly gives talks on journalism and the media industry. She holds a degree in Business and English Literature from the University of British Columbia, Vancouver.