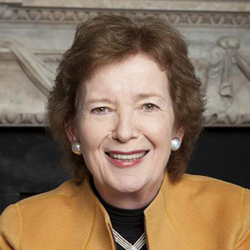 Mary Robinson served as the first female President of Ireland from 1990-97, and UN High Commissioner for Human Rights from 1997-2002.

Throughout her career as a lawyer, politician and diplomat, she has been a human rights advocate. Robinson is renowned for bringing the human rights agenda into the core of United Nations activities, for transforming the Irish Presidency, and elevating Ireland's international status. Today she retains a high visibility on pressing issues such as global health, gender equality, the battle against poverty, and supporting microfinance in many nations.

In 2013, Robinson was appointed the UN Secretary General’s Special Envoy for the Great Lakes region of Africa. She heads the Mary Robinson Foundation – Climate Justice, a centre for education and advocacy on sustainable and people-centred development in the world’s poorest communities. She is also Chancellor of Trinity College Dublin. She serves on many boards, including the Mo Ibrahim Foundation and the European Climate Foundation, Vaccine Fund, the Global Commission on Migration and the Business Leaders Initiative on Human Rights.

As an academic (Trinity College Law Faculty 1968-90), legislator (Member of the Irish Senate 1969-89) and barrister (Irish Bar 1967-90) she sought to use law as an instrument for social change, arguing landmark cases before the European Court of Human Rights and the European Court in Luxembourg as well as in the Irish courts.

Between 1990-97 Robinson brought legal knowledge, intellect, and political experience to the Irish Presidency. She reached out to the Irish diaspora, changed the face of Anglo-Irish relations, and elevated the country's international status, by fighting for controversial changes and bridging religious, social and economic groups. She placed special emphasis during her Presidency on the needs of developing countries. She was the first head of state to visit Somalia following the crisis there in 1992, and brought global media attention to the suffering of Rwandans as the first Head of State to visit the country just after the 1994 genocide. By halfway through her term of office her popularity rating reached an unprecedented 93%.

As UN High Commissioner for Human Rights from 1997-2002 Robinson used her impressive skills as an academic, legislator and human rights lawyer to implement social change. She gave priority to implementing the Secretary-General's reform proposal to integrate human rights into all the activities of the United Nations. During her first year, she travelled to Rwanda, South Africa, Colombia and Cambodia, among other countries. In September 1998, she visited China-the first High Commissioner to do so--and signed an agreement with the Government for OHCHR to undertake a wide-ranging technical-cooperation programme to improve human rights in the country. Mrs Robinson also strengthened human rights monitoring in such conflict areas as Kosovo.

In 2002, after leaving her post at the UN, Robinson founded the non-governmental organisation Realising Rights: The Ethical Globalisation Initiative. Its central concerns included equitable international trade, access to health care, migration, women’s leadership, and corporate responsibility. She was also a founding member of the Council of Women World Leaders, a network that mobilises women leaders at the highest levels to promote democracy and gender equality. She served as honorary president of Oxfam International 2002-12; former President of the International Commission of Jurists; was a member of the Club of Madrid, a group of global leaders working on governance and conflict issues; and Chair of the International Institute for Environment and Development (IIED).

Robinson is the recipient of numerous honours and awards, including the 'Presidential Medal of Freedom' in 2009. She received Spain’s prestigious 'Prince of Asturias Award in Social Sciences' for her work as a global human rights campaigner in 2006, and was named a “Hero and Icon” as one of Time magazine’s 2005 top 100 men and women, whose, “power, talent, or moral example is transforming the world.” In 2004, she received Amnesty International's 'Ambassador of Conscience Award' for her work in promoting human rights.