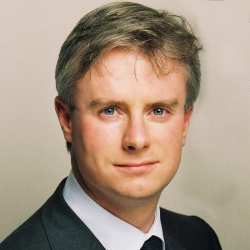 Author of ‘Ireland and the Global Question’ and ‘What did we do right?’

Michael O'Sullivan is the author of 'Ireland and the Global Question' and 'What did we do right?', two books that examine the economic, social and foreign policy aspects of how Ireland became one of the world's most globalised countries and the challenges that lie ahead of it in a post Credit Crisis world.

Michael is currently Head of UK Research and Global Asset Allocation at Credit Suisse Private Bank. He previously worked as a strategist for Goldman Sachs International, UBS Warburg and Commerzbank Securities and State Street Global Markets. He has taught finance and economics at Oxford and Princeton Universities.

Michael's two books on Ireland use it as a case study of how a country can successfully adapt to globalisation, but importantly, in the light of the Credit Crisis he also highlights the dangers associated with this. As a commentator and practitioner he is very well placed to track the enormous financial, economic and political changes produced by the Credit Crisis.

His work aims to spell out the lessons that a range of other countries and regions, notably emerging markets, can learn from the Irish experience of globalisation. Specifically, he asks how other developing countries can 'catch-up' with wealthier ones, and also how individual economies and societies countries need to change to adapt to a rapidly changing world post the credit crisis.

Michael appears regularly on CNN, CNBC and Bloomberg TV and the BBC World Service Radio. He contributes articles to newspapers like the Irish Times and Wall Street Journal Europe.

He writes and speaks on international finance and economics, especially on globalisation, financial markets, the Credit Crisis and how the world is changing as a result of this.