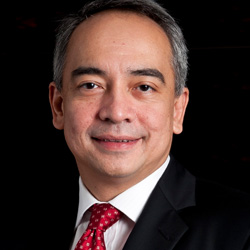 Nazir Razak is the Non-Executive Chairman of Malaysia Development Bank. He graduated with a Bachelor of Science (Hons) in Economics and Politics, University of Bristol and obtained a Master of Philosophy in Development Economics from the University of Cambridge. He was a Chevening Fellow at the Oxford Centre for Islamic Studies in 2010 and a Transformational Leadership Fellow at the Blavatnik School of Government, Oxford University in 2019.

Nazir brings with him over 29 years of experience in the banking industry. His career began in 1989 in the corporate advisory department of Commerce International Merchant Bankers Berhad (now known as CIMB Investment Bank Berhad). He held various roles within the firm before being appointed as Chief Executive in June 1999 at the age of 33. Nazir spearheaded CIMB’s transformation from a Malaysian investment bank to an ASEAN universal bank via a series of bank acquisitions across the region. He served as the Group’s CEO for over 15 years, until 2014 when he became its Chairman. He retired from CIMB in October 2018.

During his career at CIMB he also served as a Non-Executive Director of Khazanah Nasional for 4 years from 2014 to 2018 and a member of the Employee Provident Fund Investment Panel for 15 years from 2002 to 2017.

Nazir received various accolades throughout his career. In 2004, he was awarded the American Express and Business Times CEO of the Year Award. He also became the youngest ever recipient of Finance Asia’s prestigious “Lifetime Achievement Award” in 2009. He received the Euromoney’s Outstanding Achievement Award in 2012 and Asia House Asian Business Leader Award for 2015.

Nazir has made significant contributions in philanthropy. He was instrumental in setting up the CIMB Foundation in 2007 and now sits on the advisory board of the Centre for Asian Philanthropy and Society (CAPS) and is a trustee of the Urological Cancer Trust Fund of Universiti Malaya.