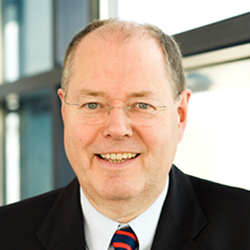 Peer Steinbrück was Finance Minister of Germany from 2005 to 2009, in the government of Chancellor Angela Merkel. Peer took responsibility for a number of difficult and unpopular decisions during the economic crisis, which were intended to help the economy in the long term.

After his graduation in economics and social sciences in 1974 Steinbrück worked for several German ministries and, from 1978 to 1981, in the office of German Chancellor Helmut Schmidt. In the 1980s, Steinbrück was the chief of staff to the Minister President of North Rhine-Westphalia, Johannes Rau. In 1993, he became the minister of economy and infrastructure in the state of Schleswig-Holstein. He then returned to North Rhine-Westphalia, where he became the minister of economy and infrastructure in 1998 and finance minister in 2000. From 2002 to 2005 Steinbrück served as Minister President of North Rhine-Westphalia. He headed a coalition government between the SPD and the Green Party. In the state election on 22 May 2005, Steinbrück's SPD lost to the Christian democratic (CDU) opposition. This loss also had consequences for federal politics: then German Chancellor Gerhard Schröder, who already was enfeebled by weak opinion polls and criticism within his own party, announced plans to call an early federal election for the Bundestag. This ultimately resulted in the 2005 federal election. After the 2005 Bundestag election, SPD and CDU formed a grand coalition under the leadership of new Chancellor Angela Merkel (CDU).

Peer Steinbrück became finance minister of Germany in November 2005. From 2005 to 2009 he also has been deputy chairman of the SPD. One of Peer's major achievements as Federal Finance Minister was to introduce tax identification numbers, a move which had been discussed for many years. He is generally considered a member of the more conservative wing of the party. Steinbrück also was a sharp critic of the Swiss banking secrecy, which in 2009 caused some tensions between Germany and Switzerland.

After being Finance Minister, Steinbrück has served as a Member of Parliament (Bundestag) since 2009. He has been a prominent speaker for the SPD, especially on economic matters. In 2013 he ran and lost in the federal elections against Angela Merkel.

Amongst many covered themes Peer talks about Politics, Europe, Global Economy and Brexit.