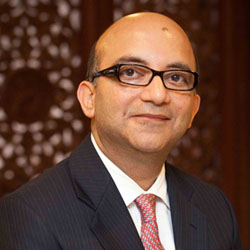 Rajeev is the CEO of Stewardship Asia Centre in Singapore, and Founder President of the Leadership Energy Consulting (LEC) Company in Seattle, WA.

Author of the Wall Street Journal and Amazon best seller Open Source Leadership (McGraw Hill 2017), Too Many Bosses, Too Few Leaders (Simon & Schuster 2011), co-author of Be the Change (McGraw Hill 2014) and a regular writer for Forbes, he is an out-of-the-box thought leader on leadership, management and corporate governance.  He has extensive global experience in leadership and organizational consulting, with a particular focus on uncovering personal and organizational “leadership energy.”

Rajeev’s professional roots are in industry. Prior to starting LEC, he was CEO of the Iclif Leadership & Governance Centre based in Malaysia.  Formerly, he has been Chief Learning Officer of both Coca-Cola and Morgan Stanley, and has held senior positions at American Express, HSBC and Goldman Sachs. At Goldman, Rajeev helped found Pine Street – the firm’s acclaimed leadership academy – and headed Pine Street for Europe and Asia. In his early career he was a banker and currency trader.

In 2014 and 2017 he was named one of Top 100 Global Thought Leaders for Trustworthy Business by ‘Trust Across America.’  Rajeev and his family have lived in fifteen cities in eight countries, and he currently splits his time between Singapore and USA.