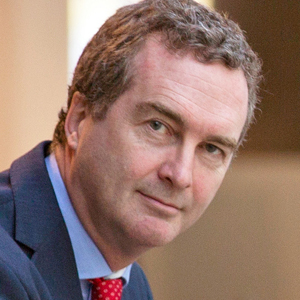 Robert Hannigan was Director of GCHQ, the UK’s largest intelligence and cyber security agency, from 2014-17 and recently retired from Government after 20 years in national security roles, including Prime Minister’s Security Adviser.

He is now Executive Chairman for Europe of BlueVoyant, a global cyber security services company, and Senior Adviser at McKinsey & Co.

Robert established the UK National Cyber Security Centre in 2016, having been responsible for the UK’s first cyber strategy in 2009.
While at No10 he also published the first National Risk Register for the UK in 2008. He is a leading authority on cyber security, cyber conflict and the application of technology in national security and writes regularly on cyber issues in the Financial Times.

Robert Hannigan is a Senior Fellow at Harvard’s Belfer Center, the Institute of Engineering and Technology, and the Royal United Services Institute, and an Honorary Fellow of Wadham College, Oxford.