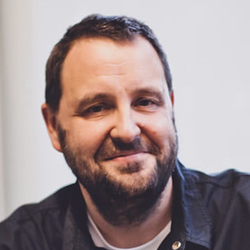 Russell Davies is a writer and strategist. He’s spent twenty-five years working with organisations like Nike, Apple, Microsoft, Honda and LOCOG (London 2012) figuring out what happens when organisations and services meet the internet. His most well-known work is probably the strategy development that led to Honda’s ‘Power Of Dreams’ campaign and Nike’s Run London. He was Creative Director and Director of Strategy for the Government Digital Service and Director of Digital Strategy at the Co-op.

He is currently Interim CEO of Doteveryone.

He cofounded Newspaper Club and RIG, is a Contributing Editor for Wired Magazine and is a Visiting Fellow at the Mile End Institute.

He’s the only person to have won both an APG Creative Planning Award Gold and a D&AD Black Pencil. (Only advertising people will be impressed by this.)

In his spare time he’s spent twelve years blogging, made a BBC programme (mp3) about the ‘Internet of Things’, organised the Interesting conferences and written a book about great British cafes. He talks regularly at tech/culture conferences and relentlessly mucks about on the internet.

His work has featured at the Museum of Modern Art in New York.