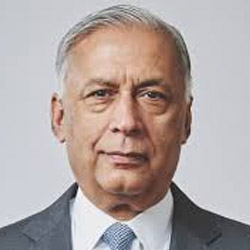 Shaukat Aziz was Prime Minister of Pakistan from 2004-07. He presided over a period of impressive domestic economic growth and successfully tackled many of the challenges presented by the global economy. In 1999 Mr. Aziz was appointed Pakistan's Minister of Finance with responsibility for Finance, Economic Affairs, Statistics, Planning and Development. As Finance Minister of Pakistan, he implemented financial reforms that spurred Pakistan's economy into a period of unprecedented growth. Aziz brought his country from near financial ruin to a point of remarkable economic growth. Much of the success was attributed to Aziz's ability to bring a more goal-oriented corporate culture to his government.

Mr Aziz began his thirty year career with Citibank in Karachi before moving overseas in 1975. He served the bank in very senior positions in the Philippines, Jordan, Greece, USA, UK, Malaysia, Singapore and Saudi Arabia advising the governments of many of those countries. Citibank appointed him Vice President of Citibank in 1992, the culmination of a glittering career in global finance and international banking.

Mr Aziz is a frequent speaker on international finance and has attended numerous forums, seminars and conferences. He has been a member of the Board of several Citibank owned entities including Saudi American Bank, Citi Islamic Bank as well as several non-profit organisations.

Aziz is known for his strategic approach, transparency and ability to focus on doing what is best, not politically expedient. His dedication and hard work assisted him in his responsibilities with finance, economic affairs, statistics, planning and development and revenue divisions. Known for securing significant loans from the United States in return for support of the war against terror, Aziz restored Pakistan's credibility in the global marketplace.

Mr Aziz's long career with Citibank and his experiences as Prime Minister and Minster of Finance give him a unique perspective on geopolitical issues, international finance and the fluctuating global economy. The sheer breadth of his knowledge and experience ensures that his opinions are avidly sought after and listened to all over the world.