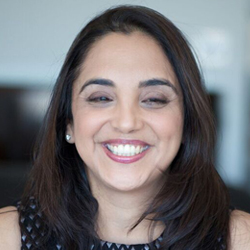 Sheena is a blind Indian American professor at the Columbia Business School who has spent her career studying choice – why it matters, how we choose, and how we can choose better.

Raised by Sikh immigrants in Queens, New York, Sheena’s family life provided her with a strict cultural and religious framework for making choices. But being blind and growing up in a country that values choice – or the freedom to choose – created meaningful dissonances in her experience of what choice was and how we can get the most from it. Thinking about the power and paradoxes of choice have driven Sheena’s research from the beginning. The world renowned expert on choice and decision making Sheena Iyengar wrote the book “The Art of Choosing” to answer these questions.

Sheena received a B.S. in Economics from the Wharton School of the University of Pennsylvania and a Ph.D. in Social Psychology from Stanford University. Prior to Columbia, she taught at the Sloan School of Management at MIT. She has pushed at the forefront of professional research on human decision-making, starting with her famous jam experiment of the mid-1990s. Sheena and her collaborators made use of different flavours of jam to show that the difficulty people face in making decisions is tied to a puzzling contradiction: when it comes to choice, oftentimes more is less.

Though we think more choices are a universal good, the phenomenon of choice-overload can actually impair our ability to make the most of choice. Since her original jam study, Sheena has explored the psychology of choice to explore how humans make decisions in the innumerable and varied social contexts — such as the decision of what to drink with your meal, to what to wear, who to date, how to pursue your career options, how to invest, and decisions regarding the end of life — that require us to choose, and from a seemingly endless array of options.

Sheena’s research has been published in top academic journals and covered by the New York Times, the Wall Street Journal, The Economist, CNN, The BBC, and more. Dr. Iyengar received the Presidential Early Career Award in 2002, was voted among the Top 50 most influential business thinkers by Thinkers50 in 2011, and was rated one of the world’s best B-School Professors by Poets and Quants in 2012. Her bestselling book “The Art of Choosing” received a Financial Times and Goldman Sachs Business Book of the Year 2010 award, and was ranked #3 on the Amazon.com Best Business and Investing Books of 2010.

Her documentary on the Art of Choosing remains one of the most watched documentaries in Japan and her TED Talks have collectively received over four and a half million views. Sheena frequently appears on television and speaks to vast audiences, from Fortune 500 companies, nonprofits, and banking, financial, government, and medical institutions around the world. She also loves to inspire young people through commencement speeches and her award winning teaching. Her most popular course at Columbia is “Leadership and Organizational Change,” and her newest is “Think Bigger,” co-taught with Craig Hatkoff.

Today Sheena continues to do research on questions of how we make decisions about how we construct our social networks, and how we create and select innovative ideas. Her next book project tackles the idea of authenticity and how we create – choose – our self identity.