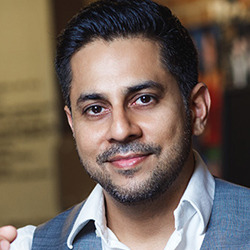 Founder and CEO of Mindvalley, Vishen leads a dedicated team of over 100+ brilliant minds focused on building game-changing systems to bring innovation to education under their goal of “pushing humanity forward”.

Vishen invests in and builds education companies. The company’s goal is to touch the lives of 1 billion people by 2050 with products, services and ideas that you won’t get from traditional education systems.

Vishen’s projects include applications that promote healthy, happy, extraordinary living, such as Omvana, one of the highest grossing health and fitness apps for iPhone, and online learning platforms such as the Mindvalley Academy, which features courses and programs in personal growth, entrepreneurship, health and wellbeing.

In Asia, Vishen’s goal is to culture hack the behavior of young entrepreneurs to turn his home city of Kuala Lumpur into one of the top startup hubs in the world. Through Project Renaissance, he funds and hosts grassroots meet-ups that gather Malaysia’s knowledge workers and leading experts across web technology, mobile technology, entrepreneurship, education, social media, public speaking and more.

Vishen is also the founder of Mindvalley Technology, which builds mobile and web education businesses, Awesomeness Fest and Zentrepreneur, the annual entrepreneurial festivals, and the Mindvalley Foundation, which supports causes around the world that are working to push humanity forward.

Mindvalley is known for it’s stellar success rate in launching new businesses – almost 90% are profitable within 10 months with little outside funding. It’s also known as one of the #1 places in the world to work and attracts brilliant minds from around the world to move to Malaysia to work on Vishen’s team.

Vishen is also an active philanthropist via the Mindvalley Foundation and sits on the Innovation Board of the X Prize Foundation.

Events that he’s spoken at before include: Engage Today, TEDx Ajman, 925 Festival (Finland).