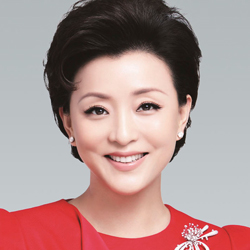 A leading broadcast journalist and media entrepreneur, Ms. Yang first made her name when she hosted CCTV’s “Zhengda Variety Show”, which earned her “Golden Microphone Award” in 1994. Her show  (“Yang Lan Studionow named “Yang Lan One on One”) for Hong Kong based Phoenix TV, has become China’s longest in-depth talk show of more than 600 interviews with leaders around the world. In 2005 she created “Her Village”, a TV talk show geared towards Chinese urban female audience, which was developed into a multimedia community to empower women.

An entrepreneur, she co-founded Sun Media Group in 1999, which has since grown to become one of China’s leading private media groups, well known for creating high-quality original content and developing cross-media, cross-country communications. In 2000, Ms. Yang and her husband launched Sun TV, the first satellite channel on history in Greater China. In 2005, she and her husband also founded the Sun Culture Foundation, a non-profit organisation dedicated to advocating and promoting the growth of society, by improving education and promoting philanthropy. She remains Chairperson of the Sun Culture Foundation.

She was chosen to represent China as the ambassador for Beijing’s bid for the 2008 Olympic Games, and was named as Goodwill Ambassador for 2010 Shanghai Expo. Currently she is the Global Ambassador for Special Olympics Movement and the first UNICEF Ambassador in China, and the Co-Chair of Lincoln Center China Advisory Council.

Ms. Yang has received many awards, including “Chinese Women of the Year” award, “Top Ten Women Entrepreneurs” award, “She Made It” award by The Paley Center For Media, “Global Leadership Award” by SIPA of Columbia University, “National Philanthropy Award” and “Women’s Achievement Award” in China.