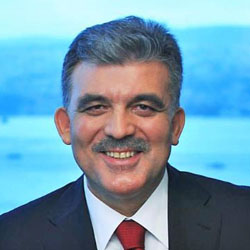 Gül maintained a focus on democratic reform.  As prime minister and subsequently as foreign minister, Gül pursued a pro-active foreign policy and largely succeeded in striking a balance between Turkey’s traditional Western-anchored foreign policy priorities and its new interests in the Middle East and the Muslim world.  His subsequent bid for the Presidency drew strong and highly vocal opposition from ardent supporters of secularism in Turkey and was initially blocked by the Constitutional Court due to concerns over his Islamist political background.

Earlier in his career, Gül worked as an economist at the Islamic Development Bank (IDB) in Saudi Arabia from 1983-91, was elected as an MP for the Welfare Party in 1991 and resigned from his position at IDB.  Initially a member of the Islamist Welfare Party, Gül joined the Virtue Party in 1998 after the latter was banned for anti-secular activities.  When the party split into hardline Islamist and modernist factions in 2000, Gül joined fellow party member Recep Tayyip Erdoğan in advocating the need for reform and moderation.  He co-founded the moderate Justice and Development Party (AKP) with Erdoğan in 2001.

He was elected as Turkey's first Islamist President after the 2007 general election.