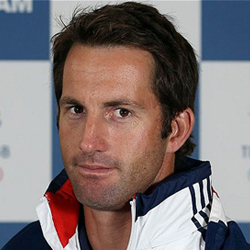 Sir Ben Ainslie is the most successful Olympic sailor of all time.

With a sailing career which began at the age of eight, Ben was Laser Radial World Champion at the age of sixteen, and went on to win his Olympic silver in the Laser Class at the Atlanta 1996 Olympic Games at just nineteen years old. Four years later, he achieved Olympic gold at the Sydney 2000 Olympic Games. After Sydney, Ben switched from the Laser to the Finn Class.

The move to the Finn meant Ben had to increase his bodyweight by fifteen kilos to achieve the optimum weight for the class. His grueling training programme paid off when he struck gold once again at the Athens 2004 Olympic games. Ben secured qualification to the Beijing 2008 Olympic games by winning an unprecedented fifth world title at the 2007 Finn Gold Cup in Melbourne, Australia. Despite falling ill days before his Olympic defense, Ben showed his champion spirit and won his third consecutive Olympic gold medal.