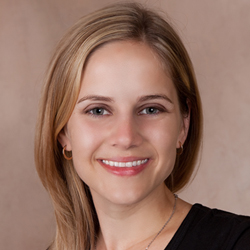 Elizabeth is the CEO and Co-Founder of The Akilah Institute.

The Akilah Institute for Women is a college for young women in Kigali, Rwanda. Akilah empowers young women in East Africa to transform their lives by equipping them with the skills, knowledge and confidence to become leaders and entrepreneurs.

In 2007, Elizabeth moved to Rwanda from the US. She spent the first couple of years volunteering with grassroots projects for street children and then started a nonprofit organization in the US to support these initiatives. She was deeply inspired by the resilience and reconciliation witnessed in Rwanda since the 1994 genocide, when more than 1 million people were killed in 100 days.

Rwanda has made tremendous progress in moving away from their dependence on foreign aid and stimulating local development. In 2008, Rwanda became the first country in the world to have a majority of women in Parliament.

In, 2010, Co-Founder Dave Hughes and Elizabeth sketched their vision of creating an institute for young women, an environment that would provide students with valuable skills and training, propelling them onto a meaningful career path and preparing them to launch their own ventures. This nurturing environment would provide a space where young women could heal after experiencing severe trauma during the genocide.

Elizabeth is a sought after inspirational speaker, who passionately speaks on Womens’ rights, Leadership, Empowerment and the importance of education.