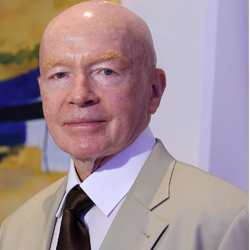 One of the “Top Ten Money Managers of the 20th Century”

In 2006, Asiamoney magazine listed Mobius as one of the “Top 100 Most Powerful and Influential People.” Asiamoney stated that Dr.Mobius “boasts one of the highest profiles of any investor in the region and is regarded by many in the financial industry as one of the most successful emerging markets investors over the last 20 years. Despite tough times during the financial crisis nine years ago, he still commands a strong following in the investment world and is influencing the direction of billions of investment dollars.” The World Bank and Organization for Economic Cooperation and Development appointed Dr. Mobius joint chairman of the Global Corporate Governance Forum Investor Responsibility Taskforce.

Dr. Mobius earned Bachelors and Masters degrees from Boston University, and a Ph.D. in economics and political science from the Massachusetts Institute of Technology.