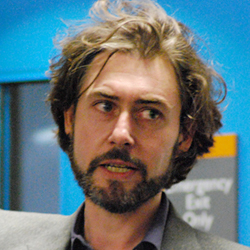 Patrick Bergel is a technology entrepreneur and digital strategy consultant.

He was previously Founder and CEO of London's first mobile search startup, Cluster, and most recently launched mobile data-sharing platform Chirp as CEO and Founder. Chirp was the #1 download on iOS in six countries including the UK and China.

Chirp has generated over 24M page views worldwide, was nominated for a Design Museum Digital Design of the Year Award, and won Gold Prize in Mobile Innovation at the 2013 Lovie Awards.

In June 2016, Bergel left Chirp to start a new business, and remains active on the Board as a Director of the company.

In addition to starting new technology businesses with original IP, Bergel has has worked as Creative Director and problem-solver in digital design, brand and strategy roles at UK agencies including Myrtle, AKQA, Protein and Callcott, for clients including Microsoft, LG, Nike, HP, Ray-Ban.

As well as his work with mobile seach, Bergel also has experience with: the Internet of Things, wearables and connected devices, crowdfunding, startup marketing and digital product design.