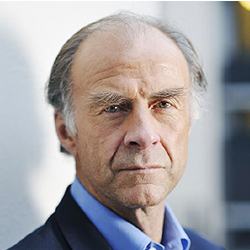 In 1984 the Guinness Book of Records described Sir Ranulph Fiennes as the “World’s Greatest Living Explorer”.

His expeditions around the world include Transglobe (the world's first surface journey around the world's polar axis) 1979-82; North Polar Unsupported Expedition (furthest north unsuppported record) 1986; Anglo-Soviet North Pole Expedition 1990/91; co-leader of the Ubar Expedition (which in 1991 discovered Ptolomy's long-lost Atlantis of the Sands, the frankincense centre of the world); leader of the Pentland South Pole expedition 1992/93 (which achieved the first unsupported crossing of the Antarctic Continent and the longest unsupported polar journey in history).

In 1993 he was awarded an OBE for “human endeavor and charitable services”.

To date, Sir Ranulph has, through his expeditions, raised over £14.2 million for UK charities. He has led 22 major expeditions to remote parts of the world including both Poles.

In 2003, only 3½ months after suffering a massive heart attack and double bypass operation, he ran 7 marathons on 7 continents in 7 days.

In 2004 he came second in the International North Pole Marathon and, in 2005, he raised £2m through his ascent to within 300 meters of the Everest summit ridge for the British Heart Foundations new research MRI scanner. In March 2007, he climbed the North Face of the Eiger and raised £1.8m for Marie Curie Cancer Care’s delivering Choice Programme. Also in 2007 Winner of ITV’s Greatest Britons 2007 Sport Award and in May 2008, climbed Everest (Nepal-side) to within 400m from the summit. In May 2009 he successfully summited Everest, raising nearly £3m for Marie Curie Cancer Care.

He is the author of 18 books including The Feather Men,(a UK No 1 Best Seller and which in 2011 was released as a major motion picture called Killer Elite), Beyond the Limits, Captain Scott, the best-selling biography of 2003 and his latest autobiography, Mad, bad and Dangerous to Know 2007. His latest book My Heroes was published in 2011 and describes the extraordinary and often horrific events that led to ordinary individuals becoming Sir Ranulph's great heroes.

By drawing the analogy between nature's most dangerous and difficult challenges, and the very real day-to-day business challenges, Sir Ranulph involves each individual in the audience on a very personal level. The elements vital to the success of an expedition include teamwork, determination, patience, discipline, enthusiasm and creative thinking. Building a team with the right character and attitude is of paramount importance. Persistence, tolerance, planning skills, high organisational ability, flexibility to meet and beat unexpected obstacles, goal-setting and performing under extreme pressure are clearly all factors in the success of Sir Ranulph's remarkable endeavors. The same qualities are all crucial to success in the business world.