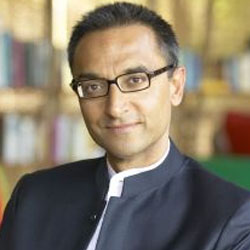 Sonu Shivdasani is Founder and Chief Executive of Six Senses Resorts & Spas, a super-luxury resort and spa group with properties in 6 countries.

In less than two decades Sonu has created a whole new take on high-end hospitality by establishing the Six Senses group. In 1995, together with his wife Eva, they opened their first property Soneva Fushi, in the Maldives, creating a high end market in what was formerly a mass market destination. In 2000, Soneva Fushi was awarded the Best of the Best by the readers of Conde Nast Traveller UK. Sonu's concept was Intelligent Luxury and was the forerunner and inspiration for a host of imitators who saw the potential in going green.

Sonu's next major project was Soneva Gili, also in the Maldives, and that country's first all-over-water resort. In one fell swoop, he had redefined the water villa. In the meantime, Sonu had begun the second-tier five-star-plus brand, which evolved to become Six Senses Hideaway the brand that introduced pool villas to Thailand, and Six Senses Latitude. He was at the forefront of luxury tourism in Vietnam, establishing that country's first real beach resort. He also launched the Six Senses Spas brand.

By 2009, Six Senses had 26 resorts that were either open or under development, and 41 Six Senses Spas that are in the group's own properties or hosted by third-party managed properties. Whereas spas were once the differentiator, he contributed greatly to making them a qualifier. Still with the environment taking equal billing with his almost legendary service standards and guest comfort, Sonu recently revised the group's core purpose: To create innovative and enlightening experiences that rejuvenate our guests love of SLOW LIFE (Sustainable-Local-Organic-Wholesome Learning-Inspiring-Fun-Experiences), of which one focus is the opportunity to reduce the carbon footprint resulting from the transportation of produce that can be produced locally. He has also declared that the Six Senses group will be decarbonising by 2020. Decarbonising is the Six Senses terminology for carbon absorption, or net absorption of CO2.

Sonu's other goals for the next decade include the recognition of Six Senses properties in the top 10 best places to work, worldwide already well on the way, with resort-like facilities for hosts living on-site at many of his properties; and creating the Six Senses Foundation to manage the group's philanthropic endeavors. The group has recently provided one developing community with a wind turbine to reduce dependence on traditional power sources, and has strong community programmes in every location in which Six Senses operates.

A person of immense energy, vitality and vision, Sonu is creating more niche brands for the future of Six Senses. Recently launched, Six Senses Destination Spas are taking the spa experience to new heights, with multi-day life-style adjustment programmes. Evalution by Six Senses will take eco-initiatives, wedded to personal luxury, to the ultimate level, while Soneva In Aqua is the soon to be launched brand of specially-built boats that are actually floating suites, with all the creature comforts expected from the brand.

A descendant of Indian parents, Sonu was born and studied largely in England, with some periods of his education being in Nigeria and Switzerland. Whilst the evolution of Six Senses keeps Sonu quite busy, he still finds time to enjoy reading, art, architecture, wine, travelling, wellness and Six Senses Living in general.