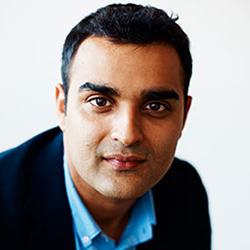 Aditya Julka is the Co-Founder and CEO of online auction house Paddle8.

Paddle8 brings the tradition-bound auction world into the 21st century. It is the destination of choice for discerning collectors, presenting online auctions that marry the expertise of an auction house with the ease and efficiency of the Internet. By focusing on works in the sub-$100,000 range, all of which are vetted by specialists or trusted partners, Paddle8 fills the "white space" between the mass market online marketplaces and Sotheby's and Christie's, with their focus on high-value trophy works.

The company now includes a team of over 100 art and tech professionals, with headquarters in New York and offices in London and L.A.

A serial entrepreneur with a history of successful start-ups, Julka brings deep business and tech experience to the art world. He co-founded two bio-tech companies in his twenties, and his last company, which was backed by Accel Ventures, sold to a publicly-listed company in 2010.

He received his undergraduate and graduate degree in engineering at the Indian Institute of Technology, Delhi, and his MBA from Harvard Business School, where he was a Baker Scholar.

Julka also serves on the board of Performa, New York's biennial for performance art and Khoj, an organization dedicated to performance art in South Asia. He has been named to the Art + Auction Power 100, Artinfo's Global 30 under 30 and the Crain's New York 40 Under 40.

Julka has been a featured speaker at many conferences and forums globally, including those at Harvard University, DLD New York, The Northside Festival, TechCrunch TV and the inaugural TEDx Art in New York.