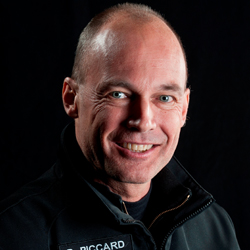 Bertrand Piccard is the Initiator and President of the Solar Impulse Project, which aims to fly a solar-powered aircraft non-stop around the world. Solar Impulse 2 took off on 9 March 2015 from Abu Dhabi, heading east in it's record-breaking attempt. After the first ever oceanic crossing by a solar aeroplane and a record breaking flight from Japan to Hawaii, the second half of the round the world trip has now been delayed to April 2016 due to damaged batteries. He shared the pilot duties with fellow Swiss, Andre Borschberg.

Piccard and Borschberg - whoever is at the controls - have to stay alert for nearly all of the time they are airborne. They are permitted only naps of up to 20 mins and have to endure the physical discomfort of being confined in a cockpit that measures just 3.8 cubic metres in volume - not much bigger than a public telephone box.

In 2012 Bertrand made the world's first solar-powered inter-continental flight and successfully landed in Morocco. Together with his co-pilot Andre Borschberg they landed late at Rabat airport after flying over the Strait of Gibraltar from Madrid. The 2,500km flight lasted for more than 19 hours, and a special terminal had to be set up in Morocco for the landing. The plane - Swiss Solar Impulse - is as large as an Airbus A340, but is lighter than a car. It charges 400kg lithium polymer batteries during the day, and can fly after dark on the power.

Earlier, in 2010 his experimental solar-powered aircraft landed safely in Switzerland after successfully flying through the night for the first time. The feat is a step toward the aim of circling the globe using the power of the Sun to fuel the plane. The aircraft uses super-efficient solar cells and batteries to stay in the air after the Sun's rays fade.

Born into a dynasty of explorers and scientists, Bertrand made the first ever non-stop round-the-world balloon flight. He is an internationally reputed psychiatrist, aeronaut and lecturer, Chairman of the Winds of Hope charitable foundation, and a UN Goodwill Ambassador. He combines science and adventure in order to promote a better quality of life.

As a balloon pilot, he applied his hypnosis techniques during the first transatlantic balloon race, that he won with Belgian Wim Verstraeten. He then initiated the “Breitling Orbiter” non-stop round-the-world balloon flight project, meeting the challenge himself in March 1999, when with Englishman Brian Jones he captained the longest flight in terms of duration and distance in the history of aviation. This success projected him onto the front of the stage as a “savanturier” or scientist-adventurer.

Following the family tradition that combines scientific exploration, protection of the environment and the search for a better quality of life, Bertrand came up with the idea of flying round the world in a solar aircraft, without fuel or polluting emissions, to promote renewable energies and encourage energy savings. In 2003 he teamed up with André Borschberg to officially launch the Solar Impulse project and start building a revolutionary aircraft. “The adventure of the 21st century consists in using human creativity and the pioneering spirit to develop the quality of life to which present and future generations are entitled.”